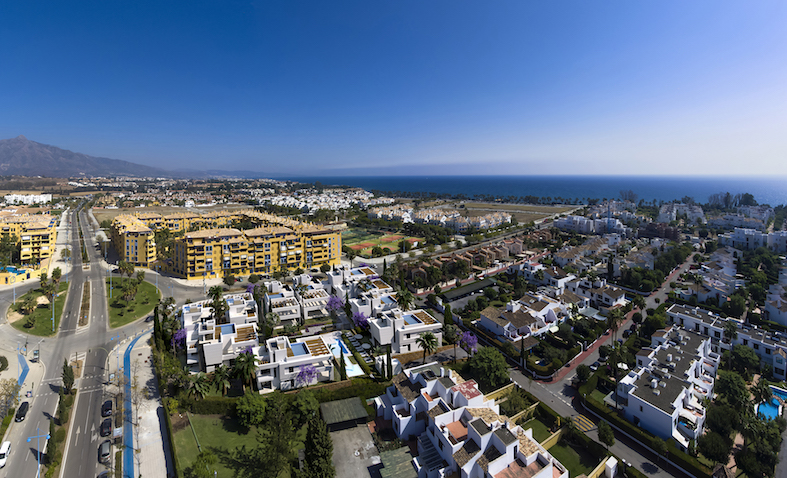 Buying a house in San Pedro de Alcantara, Marbella, is a trendy option as much among investors as among people who want to reside permanently on the Costa del Sol, or those who simply seek to enjoy it during their vacations.

This comes as no surprise. San Pedro de Alcántara with its beach area —known as Nueva Alcántara— is one of the most important towns within the large municipality of Marbella —which extends along 27 kilometers of coastline— and it concentrates all the wonders of this privileged region in a very manageable space.

San Pedro is a typically Andalusian old fishermen and farmers village, part of Marbella since 1945 and one of the most attractive tourist destinations on the Spanish coast.

However, the fact that it is not yet as developed as Marbella or Puerto Banús gives San Pedro its flavour of “undiscovered jewel”  —at least for a large part of the visitors or residents of the Costa del Sol.

As we mentioned, San Pedro concentrates in some way all the different attractions of a true paradise as the coast of Malaga.

First of all, it stands out for its location, between Marbella and Estepona and a few minutes from Puerto Banús, close to the bustling and cosmopolitan areas of the Costa del Sol, but with a quieter “holiday-by-the-sea” kind of atmosphere.

We do not mean San Pedro lacks animation: far from being a holiday “ghost town” where people disappear at the end of summer, it is a lively town with a bustling and picturesque historical center, full of shops, bars and restaurants, where the typical Andalusian joie de vivre beats throughout the year.

Certainly, when approaching the beach, the environment changes completely. Until a few years ago, the A-7 highway ostensibly separated the urban area of ​​San Pedro from its coastal area, but at the end of 2015, this stretch of the road went underground and a modern boulevard was opened on the surface.

As we said, the atmosphere changes when crossing the boulevard and entering the area known as Nueva Alcántara, marked by a clear residential character, in full expansion, where new developments of apartments and villas predominate, among green areas and land still to be exploited.

The word that best defines the beach area of ​​San Pedro is tranquility. About 800 meters from the boulevard we find its main highlight, the seafront promenade that has become famous as one of the most beautiful on the Costa del Sol.

Do not think of Marbella, Puerto Banús or Estepona promenades. San Pedro is still a “virgin” area compared to these developed populations. What we find are attractive landscaped and low-rise urbanizations, scattered among wide avenues and areas still unbuilt.

The promenade itself, however, boasts an important offer of leisure and restoration, with a prominent role for bars and restaurants. At the westernmost end, the luxurious Bora Bora and El Ancla stand out.

These are full-fledged beach clubs, with gourmet restaurant, swimming pool, terrace and fantastic views of the sea; a few steps away, Guayaba Beach (a beach restaurant), offers excellent value for money, while La Pesquera is an emblematic place whose cuisine, however, is no longer what it used to be and where we recommend a coffee or an aperitif in a privileged location, rather than a full-fledged meal.

Along the promenade we come across the beautiful designer bars El Abrevadero, L’Unique, Hawai Kai and, finally, at its eastern end (towards Puerto Banus and Marbella), El Alabardero tavern, restaurant and beach club specializing in paellas and with pool and garden.

The promenade is exquisitely maintained, with sets of palm trees and grassy areas on the sand, and offers spectacular views of the Rock of Gibraltar and the coast of Africa on clear days (by the way, we must highlight the beauty of the starry sky in this area, really spectacular for a developed tourist zone).

As we said, being a recently urbanized area and still in full expansion, San Pedro’s seaside area does not house tall buildings like those found in towns that developed decades before, like Marbella itself.

The area of ​​Linda Vista, which borders Nueva Alcantara on its western side (in the direction of Estepona), is mainly made up of villas on one level, just a step away from the beach, among which we find the archaeological site of the Paleo-Christian Vega del Mar basilica.

Within San Pedro, in the area of ​​Nueva Alcántara, we find new developments of contemporary design villas, such as Las Perlas del Mar.

By the way, we take the opportunity to mention that, just a step away from this, paddle lovers can enjoy the Nueva Alcantara Tennis and Paddle Club, the first of Spain, venue for many years of the international Padel Pro Tour and which also includes gymnasium, fitness room, restaurant, aesthetics center and sports shop.

Talking about sports, we won’t forget to mention the one that justifies the fashionable motto Costa del Golf, almost as famous as the denomination Costa del Sol.

Indeed, the beach area of ​​San Pedro borders Guadalmina Baja, the westernmost area of Marbella —well known for its impressive luxury villas—, where the Royal Golf Club Guadalmina is located, the only one on the Costa del Golf that reaches the beach itself.

One step beyond Guadalmina Alta we are entering the municipality of Estepona, the so-called New Golden Mile, where we will find successive golf courses, such as Atalaya, El Paraíso or El Campanario.

Also, the area of ​​San Pedro and its surroundings is home to prestigious schools: a few meters from the boulevard is Laude San Pedro International College; in Guadalmina (2 minutes by car), San José School, and in Linda Vista, Calpe International School.

In summary, San Pedro and its beach area, called Nueva Alcántara, is a “miniature Marbella ” still unexploited, where we find all the attractions of the Costa del Sol at a maximum of a 5 minute drive: great beaches, a panoramic promenade, luxury and economic beach bars, tennis, paddle and golf clubs, international schools, a typical Andalusian town with its lively streets, bars and restaurants.