Four restaurants with Michelin stars confirm the rise of Marbella to the status of a top cuisine destination28 Nov, 2017 Manuel Alarcon 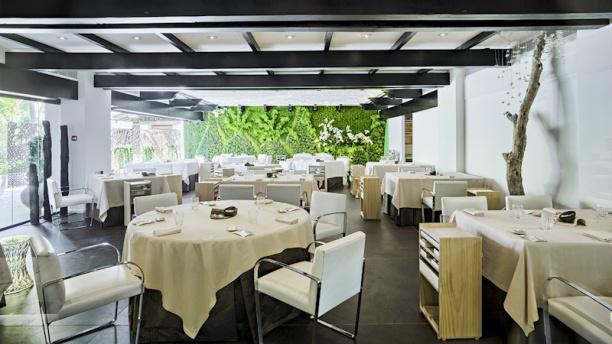 Everyone has heard of Marbella as a paradise of luxury and nightlife: shops, nightclubs, high-end cars, premium real estate… We can confirm nowadays a new dimension of Marbella as a top gastronomic destination, among the other great areas of elite restoration in Spain.

Among the wide variety of choices, the quartet of restaurants that have earned Michelin stars, the highest international gastronomic award, stands out in its own right.

A fact to be taken into account: in such an international environment as that of Marbella, the cutting-edge restaurants base their menu on the virtues of traditional Andalusian cuisine. Obviously, culinary wisdom and the local product are factors that weighs as much or more than the new techniques of creative cuisine.

– Dani García, at Puente Romano (Marbella Golden Mile): the 41-year-old chef, one of the great creators of today’s Spanish cuisine, exemplifies like nobody else the rise of Marbella in the gastronomic scene, as he himself is «a product of the land», born in the town of Malaga in 1975.

Its namesake restaurant in Puente Romano has become a temple of exquisiteness for those connoisseurs who place cuisine among the fine arts. In a space designed for enjoyment, a maximum of fifty diners are served by a team that is equivalent in number —room and kitchen staff included—, which facilitates that everything functions as a clockwork mechanism.

Dani García has used Andalusian traditional cuisine as his basic raw material, but the flight of his culinary fantasy has led to spectacular creations and a permanent reinvention.

The fruits of the sea play a prominent role in the menus of this culinary reference, where the menu consists of a wide range of tastes and sensations, citric in some dishes, refreshing in others and also of unexpected contrasts of cold and warm, textures, sweet and salty…

However, the genius of the creative chef is demonstrated specifically in the way he keeps his feet on the ground between so much daring, which results in perfectly balanced dishes, coherent with their roots.

– El Lago: Located in an idyllic setting, next to the beautiful lake of the Greenlife Golf club house (in the area of East Marbella), El Lago has become a must in the gastronomic scene of Marbella.

Five years after its foundation, in the summer of 2000, the restaurant won the prized award of the Michelin star, which has been preserved to this day thanks in large part to the good work of chef Diego del Río, who, after nine years at El Lago, has undertaken his own project.

The new head chef, Juan José Carmona (33 years old), demonstrates the continuity of El Lago’s commitment to the best values of traditional Andalusian cuisine, but with a great author’s creativity and openness to the experimentation. As a result we enjoy a powerful intensification of tastes and a suprissing combination of textures.

– Messina: Fueled by the genius of chef Mauricio Giovanini and awarded a Michelin star, the Messina restaurant has become a prominent focus of the new signature cuisine in Marbella.

Located in the center of Marbella (with a car park right next to it), on Severo Ochoa Avenue, the space of the restaurant —with a minimalist design, with elegant red sofas and soft lighting— plays an important role in the organoleptic experience that we receive, which has been described by some assitants as “philosophical”.

Messina’s menu, based on traditional Mediterranean cuisine, is synonymous with sophistication and originality. Its degustation menu in particular constitutes an ascending scale in flavor intensity that has cemented the prestige of this great restaurant.

– Skina: exquisiteness surrounds all aspects of the last one —but not least— restaurant in the exlusive club that can boast the coveted Michelin star. To begin with, its sheer size, since it is one of the smallest restaurants in the world, with room for only… fourteen guests!

It is not surprising that you have to book well in advance if you want to enjoy its sophisticated menus based on recipes of traditional Andalusian cuisine, enhanced by creative touches of avant-garde cuisine. In addition, Skinas is located in a beautiful and picturesque corner of the historic center of Marbella, with its traditional whitewashed houses and the bursts of color of its flowers at every step.